How Brest ecoactivists are persecuted during the protest: facts and figures — Экодом | Ecohome
Skip to content 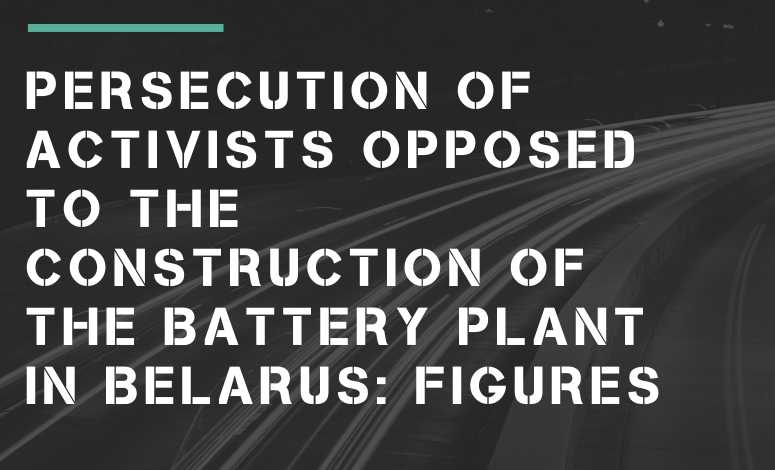 At the end of 2017, the construction of the «IPower» battery plant began at the Airport industrial site in the Brest free economic zone.

What was wrong with the «IPower»?

This significantly reduced the degree of people’s trust in local authorities and decisions that resulted in spontaneous meetings on the Lenin square in Brest on Sundays.

The public campaign against the construction of the plant:

A public campaign against the battery factory began in the region in January-February 2018.

Starting on February 25, 2018, “feeding pigeons” action takes place every Sunday on Lenin Square in Brest — an action against the construction of a battery plant, during which local residents and activists go out to communicate with each other and exchange the latest news on the construction of the plant, thereby expressing their silent protest against the construction of a battery plant in the FEZ «Brest». During this time, many of them were detained and fined. In fact, all detained or fined activists were charged with violating the established procedure for holding a mass event for participating in such meetings.

Fines and arrests for “feeding pigeons”:

Over the entire period of the protest, a great number of applications were submitted for holding in Brest and the Brest region, namely 325 rallies, 18 pickets and 16 demonstrations. The authorities allowed only one of them: the rally “Brest Women Against Lead” on April 29, 2018, which was attended by about two thousand people.

The main bases for the refusal are: “at the stated time another event has already been planned at the indicated site” or “repair work is being carried out at the declared place”. Herewith, the list of such previously planned events agreed is not publicly available, and people have no practical opportunity when submitting applications to find out what events and on which days are already planned in the place they choose for the mass event. Also, there is no public access to information on repair work at sites intended for mass meetings, and another place is not allocated for the duration of such work. And the city authorities do not offer residents for the possibility of exercising their rights — an alternative venue for the meeting or an alternative time and date.

Since mid-April, there has been a resumption of the practice of persecuting activists, toughening the pressure exerted on them and taking repressive measures against them by the state, which have become systemic and massive.

And only in the last month:

Other forms of persecution of activists:

Over the entire period of protests, local residents, human rights defenders, as well as journalists, were harassed, pressured, and persecuted in various forms.

In addition to administrative arrests, preventive detentions and fines, other forms of persecution and pressure were also observed against activists: cases of defamation, searches of activists and their relatives, criminal cases.

The information which was libellous was disseminated against activists. For example, information that local activists opposed to the construction of a battery plant near Brest allegedly received funding; the website “Enemies of Brest” was created by unknown people, which published offensive comments, false and defamatory information in against Brest residents, bloggers, activists. In addition, information was circulated in the media that business organizations are concerned that raising the environmental problems reduces the investment attractiveness of projects, and they believe that environmental organizations create “information tension” and are “toxic”.

There were also 4 criminal cases against activists. Subsequently, against two opponents of the construction of the battery plant — Moses Mazko and his son Denis Mazko, criminal cases were terminated.

Moreover, activists received a refuse to register a public organization, as well as a refusal to register an initiative group to hold a local referendum banning the construction of a battery plant.

The Aarhus Convention, to which Belarus has been a party since 2001, provides for the right of the public to participate in the adoption of environmentally significant decisions, including the right to participate in it at the earliest stage, the right to submit comments and suggestions, as well as the fact that comments and public suggestions will be taken into account when making the final decision. And in accordance with its provisions, any form of pressure or persecution of activists who exercise their environmental rights is unacceptable.

At the sixth Meeting of the Parties to the Convention in September 2017 in Budva, Decision VI/8c was adopted. The Decision established Belarus’s non-compliance with the provisions of the Convention regarding the prosecution of activists. The state has received recommendations to rectify the situation, systematically report on the steps taken, and to develop an action plan to implement the Decision.

Unfortunately, until now, the Belarusian government has not only failed to comply with the recommendations prescribed to it in 2017, but also continues the practice of persecution of activists, and does not take any steps to prevent it.

In this regard, Ecohome made a statement and assessment of the situation. We also informed the Committee about new cases of persecution of activists who exercise their rights under the Convention, as well as the lack of measures taken by the state to prevent the practice of persecution and pressure of activists.

Ecohome also appealed to the Ministry of Natural Resources, as the body responsible for implementing the provisions of the Aarhus Convention in Belarus, and to the Ministry of Internal Affairs, the Department of Internal Affairs of the Brest Regional Executive Committee and the Chairman of the Brest City Executive Committee with a request to take urgent measures to end the persecution of people who exercise their right to participate in the adoption of environmentally significant decisions.