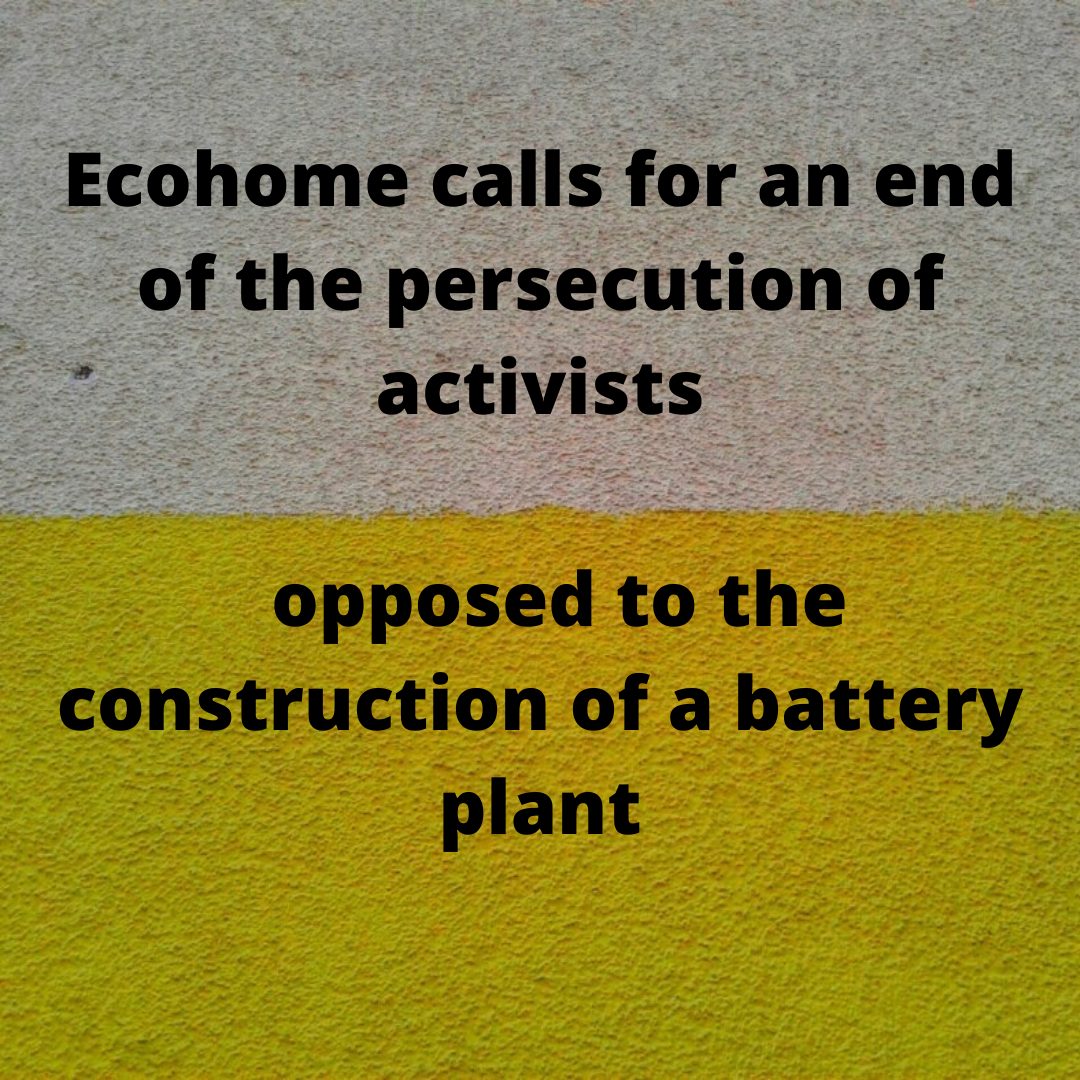 Ecohome NGO calls for an end to the persecution of activists opposing the construction of a battery plant near Brest, as well as a reconsider the practice of restricting the right of the public to hold peaceful assemblies.

Over the past month, we have noted the resumption of the practice of persecuting environmental activists, toughening the pressure exerted on them and practice of taking repressive measures against them by the state, which have become systemic and massive. Of particular concern are these events amid the spread of coronavirus infection COVID-19.

Solidarity actions began to take place in a number of cities of Belarus (Vileyka, Pinsk, Vitebsk, Gomel, Grodno, Novopolotsk, Mogilev, Bobruisk, Orsha) in support of the persecuted Brest activists. Participants of these actions were also detained and repressed.

Almost all activists are charged with violation of the established procedure for holding a mass event. As a result, they are held liable in the form of significant fines or administrative arrest for participating in meetings related to the construction of battery plants near Brest. The fines imposed on activists are incommensurable with the income level of the population and often exceed the average monthly salary in Belarus. As for administrative arrests, holding administratively liable in this form in the current epidemiological situation may endanger the life and health of people.

It is worth noting that Brest activists received constant refusals of numerous applications on their intention to hold mass events.

We consider that prosecution of activists under Article 23.34 of the Code of Administrative Offenses for violation of the procedure for holding mass events is a form of prosecution for the realization by activists of their right to participate in making an environmentally significant decision.

We also believe that preventive detention of activists in order to prevent them from participating in Sunday’s actions in Brest and keeping them in custody for about three days (usually until Monday) is an abuse by the internal affairs bodies and is carried out to put pressure on activists. We’re noting that detention is not a mandatory measure in such cases and instead it can be done just by serving the summons.

We strongly condemn the repeated detention of activists right after the courts in order to draw up new protocols for participating in a mass event. The legislation allows combining similar offences in one proceeding and considering it at the same time. Thus, we believe this method of applying procedural legislation to be another way to put pressure on activists.

The deliberate arrests and detention of persons to whom other means of restraining and ensuring their participation in the administrative process can be applied, in the context of the COVID-19 pandemic seem to be criminal intent. Recall that in accordance with the recommendations of the World Health Organization in public places it is necessary to adhere to the rules of physical distance.

In our opinion, the Ministry of Internal Affairs and executive authorities, as well as the Ministry of Natural Resources, as the body responsible for the implementation of the Aarhus Convention in Belarus, should take a more serious approach to the issue of Belarus observing the Aarhus Convention by adopting the necessary measures to exclude cases of persecution of citizens for the realization of their environmental rights, as well as taking measures to implement environmental guarantees in practice.

We believe that activists exercise their legitimate rights and interests, including those provided for by the Aarhus Convention, and the sanctions applied to them are repressive in nature, therefore we consider it necessary to cancel the decisions on prosecution due to the absence of corpus delicti in the actions of activists.

We also demand the release of all detained activists, especially in given unfavourable sanitary and epidemiological situation related to the spread of coronavirus infection.